How To Choose The Hidden Damping Slide Of The Drawer Slide

Hidden damping slide rails represent the current trend of the most high-end drawer slide rails, which has attracted great attention from companies in high-competitive industries such as furniture, cabinets, and bathrooms that want to upgrade their products. Manufacturers in these industries can only rely on product upgrades in most cases. The functional application of hardware products is used for product upgrades.

The profit of a characteristic product brought by a functional hardware is a must for building brand furniture. Hidden damping slide rail is such a high-end furniture hardware mute slide rail that fascinates brand furniture, and with hidden type, when viewing the drawer from the front, no trace of the rail can be seen.

The more high-tech products, the more prone to quality problems. If the choice is not good, it is often as simple and economical as using ordinary slides directly. Manufacturers of concealed damping slides in China have sprung up like mushrooms after a spring rain. The quality is uneven and the prices are far apart. Many production-oriented furniture companies that want to apply them have a lot of trouble. How to choose a hidden damping slide?

The most direct way to distinguish the appearance is to look at the production process. Generally, small factories will choose inferior materials due to competition, and at the same time, the mold and production level are relatively lacking, and the hidden damping slides of powerful manufacturers will use environmentally friendly steel. Its hardness will increase the load-bearing of the slide rail, and at the same time, it is not easy to rust, and the production process is mature and the appearance is good. 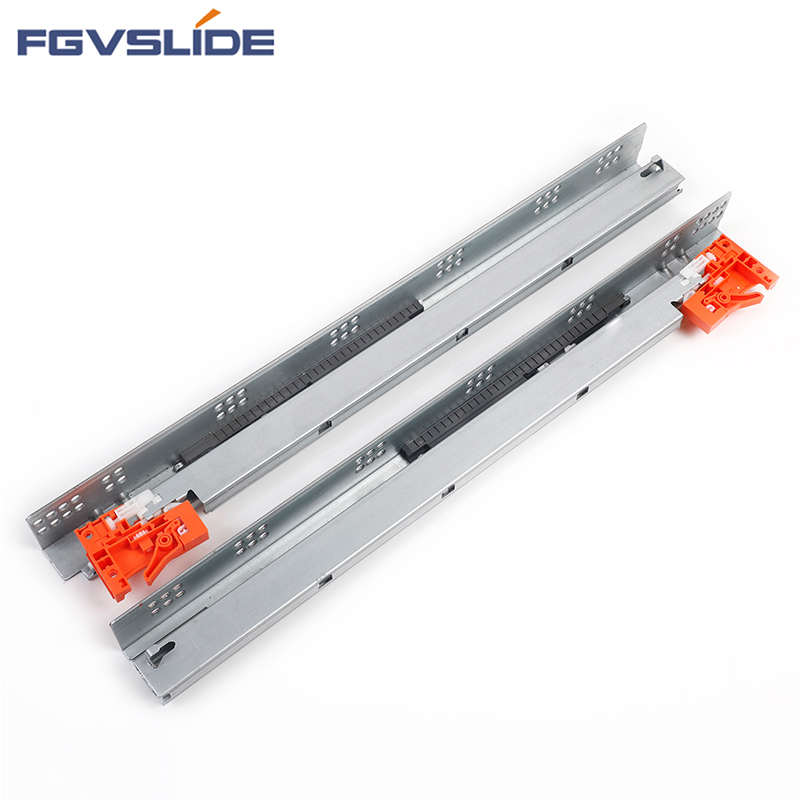 2. Pull out strength of slide rail

Push and pull the hidden damping slide by hand to see if it needs to be pulled out very hard. Many immature manufacturers are afraid that the slide rail will not be strong enough when the drawer is closed, and increase the strength of the spring, but they cannot handle it. The lightness when pulling out is so strong that it is immature.

(Two hidden buffer slide rails with handles, more in line with the needs of foreign customers)

Push and pull the hidden damping slide rail by hand , and it is most appropriate to close the slide rail for about 1.2 seconds from the moment when the slide rail produces the damping effect. It is possible that the lower drawer cannot be tightly closed after long-term use. Generally speaking, hydraulic shock absorbers for damping slides are easier to grasp the closing time, while pneumatic shock absorbers are more difficult to control. 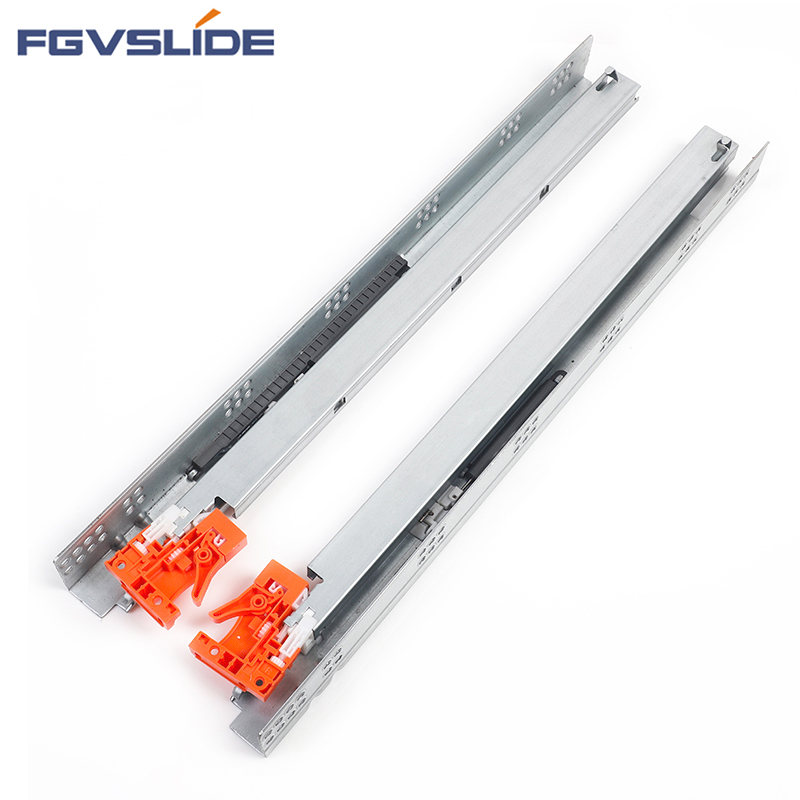 ( Three sections of buffer hidden slide rails , the drawer is fully pulled out, and the visual range of the drawer is larger and more convenient)

4. Whether the slide rail swings

The slide rail mounted on the drawer should not shake too much. If it is too large, it will generally give people a bad feeling. What's more fatal is that the damping rod buffer of the hidden damping slide rail may not be brought out of the box. Cause this high-end feature to disappear.

This is the most direct and important indicator of the quality of the slide rail, but not everyone has such a test method, allowing the slide rail to complete 50,000 runs under a load of 25 kg without damage. Or whether to obtain a certificate from an inspection agency such as SGS would be a good choice. After all, if the drawer is opened and closed 50,000 times by hand, no one will have such patience. 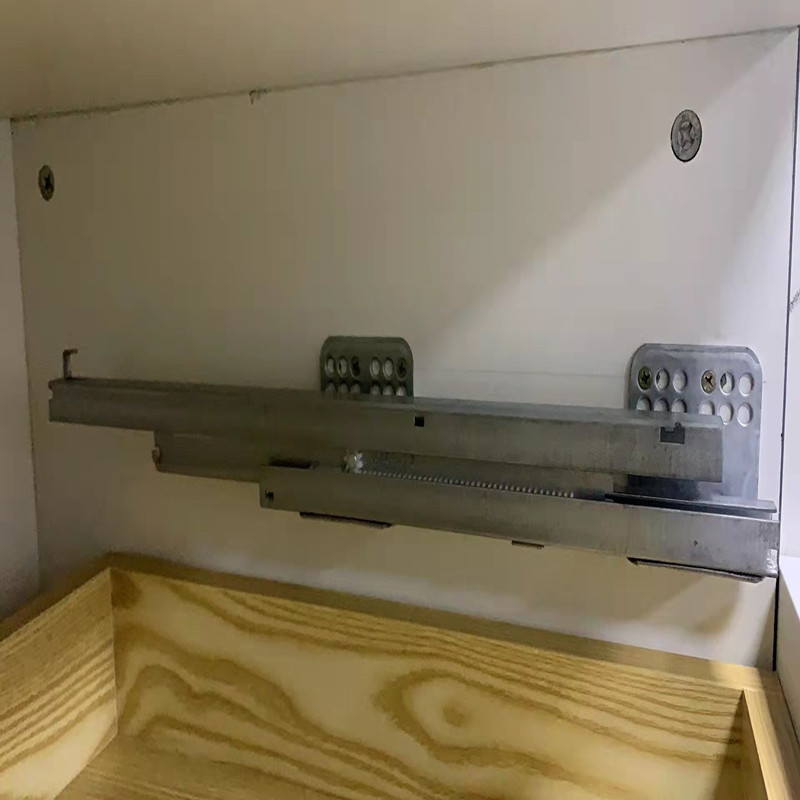 Hidden damping slides, stamping parts require a high degree of automation, and hydraulic damping rods require a high degree of automation to ensure their stability. For ordinary small slide rail manufacturers, it is difficult to guarantee the success of one-time mold opening for the development of hidden damping slide rails, and the failure of mold development is a little short, which means that the cost of molds of one hundred thousand yuan will be Soup. Modifying the mold after production is completed will also involve a lot of cost investment. Therefore, even if ordinary small enterprises know that their products are defective, they may not easily improve due to lack of funds and uncertainty in the market. At the same time, there are very few slide rail companies that can produce stamping parts and hydraulic damping rods by themselves. Generally, they use outsourced parts, which will lead to product instability and uncontrollability. The advantage of a well-known manufacturer of powerful slide rails in ensuring quality is self-evident.

(Hettich's new hidden slide rails , external buffers, both the smoothness of pulling and the quietness have reached the top level)

In general, the hidden damping slide is a high-tech product. It does not have a certain technical strength and is not enough to support its effect and durability. The blind pursuit of cheap prices may lead to the upgrading and brand promotion of furniture products. Win or lose.

If you want to know more products, please scan the QR code!

(Hettich's new hidden slide rails , external buffers, both the smoothness of pulling and the quietness have reached the top level)

In general, the hidden damping slide is a high-tech product. It does not have a certain technical strength and is not enough to support its effect and durability. The blind pursuit of cheap prices may lead to the upgrading and brand promotion of furniture products. Win or lose.

If you want to know more products, please scan the QR code!

We are always providing our customers with reliable products and considerate services.